Bartramia longicauda
Charadriiformes
This is a large and highly varied group of birds that do not have many outward similarities. Most are water birds that feed on invertebrates or small aquatic creatures. The order is well represented in Washington, with seven families:
Scolopacidae
This large and diverse family of shorebirds is made up mostly of northern breeders that migrate long distances. Their highly migratory nature leads them astray fairly frequently, and rarities often show up outside their normal range. Many of these mostly coastal birds forage in relation to the tides, rather than the time of day. They use a variety of foraging techniques, but the most common techniques are picking food from the ground or water, or probing into wet sand or mud. Those that probe generally have sensitive bills that open at the tips. Most members of this group eat small invertebrates. Many make dramatic, aerial display-flights during courtship. Nesting practices vary, but both parents typically help raise the young. Clutch size is usually four, and both parents generally incubate. The young are precocial and leave the nest within a day of the hatching of the last chick. Most feed themselves, although the parents generally tend the young for a varying period of time. The female typically abandons the group first, leaving the male to care for the young until they are independent.
Accidental summer and migrant.

The Upland Sandpiper is a black, brown, and white mottled bird with a long neck and tail and yellow legs. It has a round head with large, black eyes, and a relatively short bill for a sandpiper. In flight, it shows a pale inner wing, dark outer wing, and white outer primary shaft.

Native grassland is the Upland Sandpiper's preferred habitat. It typically feeds in shortgrass areas, where it is found in migration and during winter. The Upland Sandpiper requires taller grass for nesting. It is almost never found on mudflats or in wetland environments where other shorebirds are found. These birds are common nesters at airfields and airports throughout their range.

During the breeding season, Upland Sandpipers often perch on fence posts or utility poles. They forage by walking quickly through the grass with jerky movements, picking up items from the ground or from low vegetation.

Upland Sandpipers may nest in loose colonies, in which case the colony has a highly synchronous nesting pattern, meaning that all the chicks hatch at the same time. Nests are shallow scrapes on the ground in dense grass. They are often well hidden from above with grass arching over the top. Both parents help build the nest and incubate the 4 eggs for 22 to 27 days. The young leave the nest shortly after hatching and, while the young feed themselves, the parents protect and tend them. The young first fly at 30 to 31 days.

Upland Sandpipers are long-distance migrants, spending the winter in the pampas of southern South America. Migration is typically through the Great Plains, but is more spread out in the fall with juveniles reaching to the coasts. Fall migration begins in mid-July and usually lasts through September. Spring migration is from March through May.

The last confirmed records of breeding Upland Sandpipers in Washington were in 1993, from the population in the Newman Lake area between Spokane (Spokane County) and the Idaho border. Migrants are recorded about once a year in the Pacific Northwest. They are occasional in the spring in May, but are more often seen in the fall, in August throughout eastern Washington, and from late August to September along the coast. In the fall, most birds are juveniles, probably from the Alaska/Yukon breeding population. 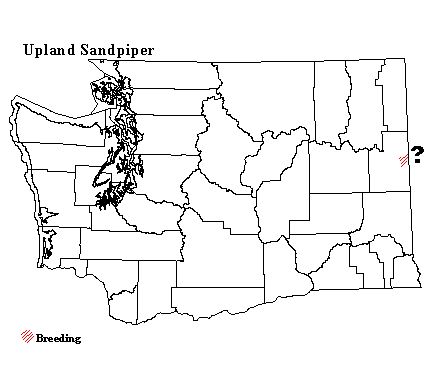